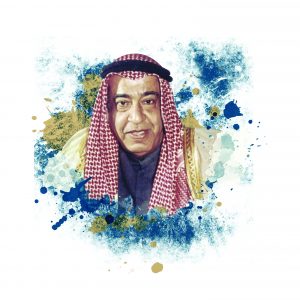 “If you believe in something and are passionate about it, what more joy could you have than making that passion into a career. My passion is chemicals. It also happens to be my career.”

So said Yousif Al Shirawi, and it was indeed the good fortune of the chemical industry in Bahrain that he was such a passionate, talented, creative, and intelligent contributor to the chemical enterprise. Through his good efforts a petrochemical industry emerged in Bahrain. He should be recognized not only because of the role he played in the creation of the Gulf Petrochemical Industries Company (GPIC) but because of his encouragement of GCC cooperation in the chemical sector.

A well-rounded, well-read intellectual, with boundless energy and a broad set of interests in fields of the humanities as well as the sciences, Al Shirawi first made his mark as Assistant Director of Education, promoting educational opportunities in Bahrain in technical and scientific fields. Astute in seeing that such education was vital to the creation and sustainability of the country’s industrial sector, Al Shirawi would be a life-time proponent of developing Bahrain’s science and engineering knowledge and in the sharing of such knowledge in the GCC.

Yousif Al-Shirawi was born in 1927 in Maharraq, Bahrain. He graduated from high school in Beirut in 1945 and in 1950 received a Bachelor’s degree in chemistry from the American University of Beirut (AUB). After serving as a secondary school teacher in his home country, he undertook graduate studies in the UK and in 1955 received a Master’s degree in chemistry from the University of Glasgow.

Upon his return to Bahrain he was drawn into public service and held a number of increasingly responsible administrative positions before being appointed Bahrain’s Minister of Development and Industry in 1970. This appointment put him in a position to pursue his long-time desire to create a chemical industry in his home country, Bahrain.

In 1977, he approached his counterparts in Kuwait and proposed the establishment in Bahrain of a Kuwait-Bahrain chemical joint venture. This initiated talks that resulted in the formation in 1979 of the Kuwait-Bahrain Chemical Company, which was a 50/50 partnership of Kuwait’s Petrochemical Industries Company (PIC) and the Bahrain National Oil Company (Banoco), both state-owned firms. A few months later, in 1980, SABIC of Saudi Arabia entered into this joint venture.

It should be noted that in 1979 the Saudi Investment Fund had acquired a 20% interest in Aluminum Bahrain (ALBA). This was at the recommendation of Ghazi Al-Gosaibi, who was Saudi Minister of Industry and Electricity and Chairman of SABIC, and who saw the investment as an alternative to establishing an aluminum smelting operation in Jubail, Saudi Arabia. The Saudi investment in ALBA ― facilitated by the good, direct working and personal relationship between Al-Gosaibi and Al-Shirawi ― paved the way for SABIC’s participation in the chemical joint venture in Bahrain. At the same time, there was a Saudi-Kuwaiti cooperation committee of which Al-Gosaibi was a member (a precursor to broader Arabian Gulf cooperation bodies), and his Kuwaiti counterparts may have approached him there with the idea that SABIC partner with PIC and Banoco in a chemical joint venture.

In any event, after SABIC entered the joint venture, the enterprise was renamed the Gulf Petrochemical Industries Company (GPIC). GPIC has the distinction of being the first and only three-state joint venture in the Arabian Gulf region.

Though SABIC, PIC, and the government of Bahrain had equal share in GPIC, Al-Shirawi sought to keep leadership of the company in Bahraini hands. It was agreed that the Chairman of the company would always be a Bahraini. The first and all subsequent CEOs of the company have also been Bahraini nationals.

Passion for his work

Al-Shirawi no doubt supported GPIC’s executives in their efforts to ensure Bahraini participation in building GPIC’s plants. This was consistent with his aspiration that GPIC bring economic benefits to the Bahraini population. Related to this, Al-Shirawi wanted GPIC to be a source of employment and training for Bahrainis. That goal is reflected in GPIC’s dedication to Bahraini participation in the workforce and its emphasis on training. Today, Bahrain nationals make up 95% percent of the firm’s employees, the highest participation of nationals in any chemical firm in the Arabian Gulf region.

Al-Shirawi’s values and ambitions for GPIC can also be seen in the company’s strong emphasis on safety and sustainability. This has helped to improve efficiency and morale at the company and has gained GPIC international recognition, winning it numerous awards. Similarly, GPIC has pursued a number of projects that demonstrate a strong sense of social responsibility. For example, in 1992 it established a charity garden – producing vegetables to be distributed to needy families. This attribute of GPIC’s corporate culture mirrors Al-Shirawi’s personality, values, and character.

In 1995, Al-Shirawi would step down as Bahrain’s Minister of Development and Industry having left a lasting imprint on the culture and operation of GPIC. In his capacity as Minister of Development and Industry Al-Shirawi also played an important role in developing other Bahraini enterprises – The Bahrain Petroleum Company (Bapco), Bahrain National Oil Company (Banoco), the Bahrain National Gas Company (Banagas), Aluminum Bahrain (ALBA), the Arab Shipbuilding and Repair Yard (ASRY), and Gulf Air. He also helped to establish Bahrain as an important regional banking center. He was also a great proponent of the Arabian heritage and contribution to the development of science and technology.

After he retired as Minister he managed a consulting firm, and in this capacity he continued to serve the Bahraini government, on the behalf of which he was involved in oil and other industry initiatives. Al-Shirawi also served in a number of non-profit organizations and was a member of the Board of Trustees of both Amman University and the AUB. He had a broad range of intellectual and scholarly interests to which he devoted considerable energy both as an organizer of events and as a writer. Al-Shirawi passed away in 2004.

For his important contributions to the industry, Yousif Al Shirawi truly deserves recognition. He is remembered and honored by GPCA for the pioneering part he played in establishing Bahrain’s vital chemical industry and in championing regional cooperation in the chemical sector.