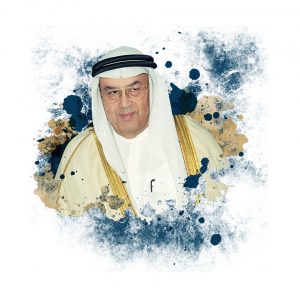 Statesman, poet, diplomat, writer, and administrator, Ghazi Al-Gosaibi played a prominent role in the modernization of many aspects of Saudi life. His most significant contribution as Minister of Industry and Electricity (1976-1983) was the creation of Saudi Basic Industries Corporation (SABIC). As head of MIE and as Chairman of SABIC, Al-Gosaibi set the foundations for SABIC and launched it upon a path of development.

In many ways, Al-Gosaibi showed the path that Saudi entrepreneurs could follow in creating private Saudi chemical enterprises. In that regard, he may be viewed not only as the progenitor of SABIC but of the whole growing private chemical sector in Saudi Arabia.

Ghazi Al-Gosaibi was born in 1940 in Saudi Arabia’s Eastern Province, but he spent much of his childhood in Bahrain, where his father was a prominent merchant and important member of the Saudi community in Manama.

In 1961 he received a law degree from Cairo University. He earned a Master’s degree in International Relations in 1964 from the University of Southern California, followed by a Ph.D. in that same field in 1970 from Imperial College in London. He then returned to Saudi Arabia to pursue an academic career at Riyadh University (today King Saud University), where in 1971 he was named Dean of its College of Commerce. Three years later he turned to public service and became the Director General of Saudi Arabia’s Railroad Organization. In 1975, King Khaled of Saudi Arabia formed a new cabinet and appointed Al-Gosabi head of the newly formed Ministry of Industry and Electricity (MIE), which had the formidable task of building a Saudi petrochemical industry.

Realizing that the technology and expertise needed for a chemical sector lay outside of Saudi Arabia, Al-Gosaibi opted to establish 50/50 partnerships with global chemical companies. To this end, he initiated and participated in negotiations with an array of companies from the United States, Japan, and Taiwan and by 1981 established eight chemical joint ventures that were to build and operate world-scale plants in Jubal and Yanbu.

Al-Gosaibi first thought that Saudi Arabia should establish a government agency that would create a chemical industry. However, upon reflection he concluded that the job could be better done by a state-owned stock company functioning “on a purely commercial basis,” i.e., driven by the need to earn a profit. Al-Gosaibi also proposed that at some later date a majority of shares in such a venture could be offered to the public. The company that Al-Gosaibi envisioned became a reality in 1976, when Saudi Basic Industries Corporation (SABIC) was established by Royal Decree. Al-Gosabi, as Minister of Industry and Electricity, became its first Chairman.

To succeed, SABIC needed world-class technical, managerial, marketing, and business know-how. Al-Gosaibi secured these from SABIC’s American and Asian partners. He insisted that they train SABIC’s Saudi employees at overseas chemical operations. He also insisted that the chairmanship of the joint venture companies be in the hands of Saudis, thus ensuring that the Saudi perspective would be paramount when decisions were made.

Al-Gosaibi had an eye for talent, a readiness to trust and empower young Saudi executives, and an ability to inspire confidence, enthusiasm, and a commitment to teamwork that were critical to rapid development of managerial and leadership skills of SABIC. Recent university graduates were recruited to the company not through the promise of perks but by the promise of being part of something truly important for Saudi Arabia. A little more than a decade after SABIC was established, Saudis headed all of the initial joint ventures and more than half of the total SABIC workforce was Saudi.

As SABIC was evolving, Al-Gosaibi furthered the formation of the chemical industry in Bahrain and promoted cooperation among Arabian Gulf states. In 1980 SABIC joined the Bahraini government and the Petrochemical Industry Company (PIC) of Kuwait to form the Gulf Petrochemical Industries Company (GPIC).

In 1982 the Dow Chemical Company withdrew from its joint venture with SABIC, and SABIC’s executive leadership decided to move forward on the chemical project without a western partner. Al-Gosaibi participated in and endorsed this very risky consensus decision. The success of the resulting enterprise – PETROKEMYA – demonstrated to skeptics at home and abroad that SABIC could effectively and independently proceed with an ambitious undertaking. This was an enormous boost to the confidence of SABIC’s people and added to the company’s global reputation.

In 1983, consistent with Al-Gosaibi’s proposal that SABIC gradually evolve into a largely private enterprise, it was announced that in the coming year shares of SABIC would be made available in a public offering. In 1984, 30% of SABIC’s share were offered to the public in Saudi Arabia and the GCC states.

Man of many talents

In 1982 Al-Gosaibi was appointed Saudi Arabia’s Minister of Health. For a year he simultaneously held two ministerial positions. In the fall of 1983, however, he decided to focus all his attention on the Saudi health sector and relinquished his position as Minister of Industry and Electricity and as Chairman of SABIC. As he did so, he was confident that SABIC was on the road to success. The coming years would prove him right. By 1985 all eight SABIC chemical joint ventures were in full operation, signaling the beginning of SABIC’s rapid evolution into a major global chemical company. Today, the firm that Al-Gosaibi helped bring to life is consistently ranked among the top five. Over the succeeding decades it has not only greatly expanded its Saudi operations and its range of products, but it has also acquired important manufacturing and research facilities in the US, Europe, and Asia.

Widely admired in Saudi Arabia for his many faceted career, his charismatic character, his thought-leadership, his contributions as a writer and poet, his role in establishing the Disabled Children Society, and his service to his country, Al-Gosaibi is recognized by GPCA for his pioneering role in establishing a basic chemical industry in Saudi Arabia and laying the path that has led to the flowering of a robust private and state-owned Saudi chemical sector.