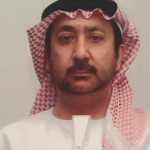 Former GPCA Board Member and former CEO of ChemaWEyaat

After building an extensive career in the chemicals and petroleum industries, Mr. Al Azdi became a driving force in the formation of Abu Dhabi National Chemicals Company, ChemaWEyaat, in 2007. Mr. Al Azdi’s career began with ADNOC in 1981, where he spent ten years working in various positions, before moving on to become President and CEO of Star Energy Group. He next served as President of Transgulf Energy, and in 1996 returned to ADNOC to establish the company’s chemicals business line. From there he played an active role in establishing joint venture companies, including Borouge, and led international M&A activities for IPIC.

Mr. Al Azdi has served as Member on the Board of Directors at Borouge, Borealis, Ruwais Fertilizer Industries, and Argrolinz Melamine Int. He holds a Bachelor of Science degree in Business from Indiana University, US and completed his post-graduate studies at Oxford, UK.