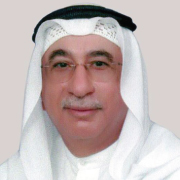 Dr. Tawfeeq Almoayed is the Principal of Dar Alistishara, a business and industrial consulting company. Previously, he served as Founding Chairman and MD of GPIC, as well as founding First Deputy Chairman of Batelco, Bahrain. He was the Vice Chairman of Dana Gas, Sharjah, UAE, and the Vice Chairman of the International Fertilizer Association (IFA). His former roles include Vice Chairman, AKAlmoayed Group, Director of Kimberly Clark Holding Company, and Manager Engineering at Cable & Wireless.

Throughout his career, Dr. Almoayed has served as Director of the Board of Bahrain Chamber of Commerce and Industry. He was a Member of Supreme Council of Youth and Sports, Bahrain and Vice Chairman of Bahrain Philanthropic Organization. He was also Founding Chairman, Bahrain Lawn Tennis Association, and Chairman of Travel & Tourism Association, Bahrain. He holds a First Class Honors Bachelor’s degree in Electronic Engineering, a Ph.D. in Telecommunications from London University and is a fellow of the Institute of Engineering and Technology of the United Kingdom.