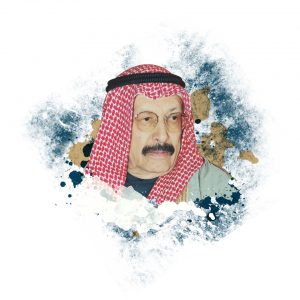 Webster’s Dictionary defines a pioneer as one who is first or among the earliest in any field of inquiry, enterprise, or progress. That definition certainly applies to the late Abdulbaqi Al-Nouri who was tireless in building the chemical industry of Kuwait. Leading the Petrochemical Industries Company (PIC) for nearly two decades, he built it into a major global player in the chemical fertilizer sector. His efforts to move PIC into the manufacture of higher value chemicals also set the stage for PIC’s evolution into a major petrochemical company, producing a broad range of chemical products.

Abdulbaqi Al-Nouri was born in 1929 in Kuwait. He attended secondary school in Cairo, where he received a diploma in industrial mechanics. He then went on to study in the United Kingdom, where in 1955 he received a degree in Mechanical Engineering. Returning to Kuwait, he assumed a teaching post at Kuwait’s Technical College and in 1962 was made Rector of that institution, the first Kuwaiti to hold that position. The following year he became a member of the Kuwait Parliament and was elected its General Secretary. His term in Parliament ended in 1967, and he then became General Manager of the National Industries Company (NIC), a 51% state-owned firm founded in 1961 to develop Kuwait’s production of building materials.

During the 1960s, the government of Kuwait started to diversify the national economy, and one display of this was its efforts to foster a domestic chemical industry. In 1963, it formed the Petrochemical Industries Company (PIC), in which it had an 80% interest. Other shareholders ―NIC, the Kuwait National Petroleum Company (KNPC), and private investors – held 9.5%, 5%, and 5.5% interests respectively.  The next year, PIC established the Kuwait Chemical Fertilizer Company (KCFC) – a joint venture with British Petroleum (BP) and Gulf Oil. KCFC became the first producer of chemicals in the Arabian Gulf region. Its manufacturing facilities were constructed in Shuaiba, and in 1967 the company began making urea, ammonia, sulfuric acid, and ammonium sulfate.

In 1971 Al-Nouri left his position with the National Industries Company to become PIC’s Chairman and Managing Director. As a result, he also became Chairman of the Board of KCFC. In 1973 he engineered PIC’s purchase of BP’s and Gulf Oil’s 40% equity in KCFC, and then merged KCFC into PIC two years later.

Meanwhile, the government of Kuwait gradually transformed PIC into a completely state-owned entity. In 1972 it acquired NIC’s interests in PIC, and four years later bought out the interests of PIC’s private investors. Next, in 1980 it integrated PIC and KNPC into the state-owned Kuwait Petroleum Corporation (KPC) that had been formed that year. In 1981 Al-Nouri became a member of KPC’s Board of Directors, and he would serve in that capacity into 1989.

Through the 1970s, Al-Nouri successfully expanded PIC’s manufacturing capacity and market reach. New fertilizer plants were built in Shuaiba, and by 1980 PIC was the largest chemical company in the Arabian Gulf region. It also was a major global player in the chemical fertilizer sector, exporting to 42 countries.

In 1979, as part of Al-Nouri’s relentless effort to grow PIC’s production, a contract was signed for construction of an additional ammonia plant in Shuaiba. That year PIC also became a joint venture partner in a chemical company in Bahrain (Kuwait-Bahrain Chemical Company) slated to produce methanol and ammonia. Al-Nouri was named its Vice Chairman. The following year SABIC joined the partnership and the company was renamed Gulf Petrochemical Industries Company (GPIC).  Al-Nouri continued as the Vice Chairman of the new enterprise and served in that position until 1986.

In the following years Kuwaiti nationals became increasingly involved in overseas chemical operations, with Al-Nouri playing an important role. In 1982 the state-owned Kuwaiti Investment House acquired a 25% interest in one of the world’s largest chemical companies at that time ― Hoechst AG of West Germany. Al-Nouri consequently joined Hoechst’s Board of Directors, and PIC became a lead supplier of ammonia to that century-old German firm. Then In the mid-1980s PIC became a minority joint venture partner in three overseas chemical fertilizer companies – one in Tunisia; one in Turkey, and another in China. The three firms combined ammonia from PIC with local phosphates to produce fertilizer for domestic and international markets. From 1986 to 1989 Al-Nouri served as Chairman of the Board of the Turkish joint venture (Turkish-Arab Chemical Company) and from 1985 to 1988 he was Vice Chairman of the Chinese venture (Chinese-Arab Chemical Company).

Al-Nouri also worked to move PIC into the production of higher value olefins and aromatics. His efforts led in 1989 to a licensing and basic engineering agreement with Union Carbide Corporation for a USD 140 million polypropylene manufacturing plant. Unfortunately, progress on this initiative was halted in 1990 by Iraq’s invasion and occupation of Kuwait. However, the relationship Al-Nouri fostered with Union Carbide in the 1980s was the staging ground for PIC-Union Carbide joint venture talks that started after Kuwait was liberated. These eventually led to the signing of a 1995 Memorandum of Understanding (MoU) that formally established EQUATE ― a joint venture in which PIC and Union Carbide had equal shares.

By the time EQUATE was formed, Al-Nouri had already left PIC. He had stepped down in 1990 as Managing Director and Chairman. However, during his tenure at PIC he had set the foundations for the company’s future success and had laid out the strategy for its evolution into an important diversified global chemical company. After retiring from PIC, Al-Nouri pursued his interest in education, becoming Chairman of the Board of the Al-Nouri Educational Corporation, which manages a number of private schools.

Throughout his career Al-Nouri had been involved in a number of trade and non-profit organizations. Most notably in 1975 he was a founding member and first Chairman (1975 to 1983) of the Arab Federation of Chemical Fertilizer Producers today known as the Arab Fertilizer Association ―AFA. He was also a member of the Board of the International Fertilizer Industry Association (IFA). He served as its Chairman from 1985 to1987 (the first to hold that position from the Arab world), and was the Vice President of IFA’s Middle East region. He was the Chairman of the Kuwaiti Federation of Private Schools and Cultural Institutes and a member of the Board of the Kuwaiti Chamber of Commerce and Industry.

In 2010 Abdulbaqi Al-Nouri passed away having lived a life of service for his country. He is recognized by GPCA for his spearheading the development of Kuwait’s chemical fertilizer industry and laying out the strategy that PIC followed to become an important manufacturer of aromatics and olefins.