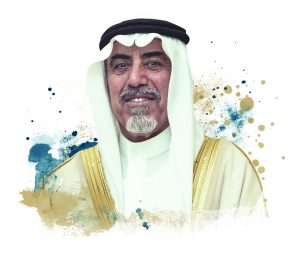 H.E. Abdulaziz Al Zamil was an iconic industry figure, whose very name equates to the establishment of a modern chemical industry in Saudi Arabia. As the first CEO of SABIC, he laid the foundations for the company’s ascend to world-class status and becoming a leading player in international chemical markets. While serving as Minister of Industry and Electricity and Chairman of SABIC (1983 – 1995), he made tremendous contribution to the Kingdom’s industrial and private sector development.

From the world-class chemical enterprises that he helped to establish, to the highly skilled national workforce he helped to develop and laying the foundations for a home-grown Saudi Arabian industry that has transformed into a leading global powerhouse – Abdulaziz Al Zamil was one of the greatest industry leaders of our times. To pay him tribute and honor his achievements, GPCA is bestowing upon him posthumously the GPCA Legacy Award “Al-Rowad” (الرّواد).

Abdulaziz Bin Abdullah Al Zamil was born in 1941 in Onaizah, Saudi Arabia but spent most of his childhood in Bahrain where his father established a successful business. When he came of age, he attended a technical college in the United Kingdom and went on to earn a Bachelor’s and a Master’s degree in Industrial Engineering from the University of Southern California (USC) in the US in 1967.

From a young age, through the pursuit of training and education, he dedicated his life to serving and building an industrial future for his country. Upon completing his studies, Al Zamil returned to Saudi Arabia to join the technical department of the Saudi Consulting House, a Governmental entity established in 1967 by the Ministry of Trade and Industry in collaboration with the United Nations Industrial Development Organization (UNIDO). In 1974, Al Zamil was named Deputy Director-General of the Industrial Studies and Development Centre, a significant stepping stone in his career.

At the helm of SABIC

During this time, the foundations were being laid for Saudi Arabia’s transformation into an industrial powerhouse. Spearheaded by the country’s wise leadership, a plan was being put in place to harness the economic potential of flared gas and develop successful petrochemical industries in the Kingdom.

To this end, at the age of 33, Al Zamil was approached by Ghazi Al-Ghosaibi, then Minister of Industry and Electricity, to play a key role in this transformation and lead a taskforce of eight experts to assess the feasibility of industrial projects which included large scale projects in Jubail and Yanbu.

The most iconic role in Al Zamil’s career came several years later when SABIC was created in 1976 and he was approached by Gazi Al-Gosaibi to take the reins and become the company’s first CEO. A combination of leadership, integrity and industry knowledge made Al Zamil perfect for the job.

There is no one more familiar with the challenges of establishing a Saudi Arabian chemical industry in the 1960s-1970s than Abdulaziz Al Zamil and Gazi Al-Gosaibi. Leading SABIC into success was far from an easy venture and they were faced with a number of serious challenges. The lack of technical knowhow, shortage of well-trained employees and no access to markets abroad were just some of the obstacles standing in Al Zamil’s way. And yet not only did he overcome these challenges, but he made a great success of every obstacle he faced on the way.

In close coordination with Al-Ghosaibi, Al Zamil built SABIC from the ground up. Despite facing scepticism from the West about SABIC’s future, he successfully attracted foreign partners, negotiated favourable terms and hired and trained highly motivated young Saudi staff. By the 1970s, under Al Zamil’s astute leadership, SABIC was pursuing a dozen joint ventures simultaneously, and signing interim agreements on six projects.

A key milestone in the history of SABIC and a testament to Al Zamil’s great courage was the establishment of Petrokemya as a fully owned subsidiary of SABIC. Originally planned to be a JV between SABIC and Dow, when Dow withdrew from the project, Al Zamil was faced with a difficult decision – to abandon it or continue on his own.

Together with the late Ghazi Al-Ghosaibi, he decided to go ahead with the project – which despite all scepticism turned out to be a tremendous success. This success enabled SABIC to not only gain confidence, but also marked the beginning of SABIC as a global chemical player. Al Zamil was a great advocate of cross-GCC cooperation. In 1980 when SABIC joined the Bahraini government and the Petrochemical Industry Company (PIC) of Kuwait to form the Gulf Petrochemical Industries Company (GPIC), the only regional joint venture in the Arabian Gulf, he played a key role in the establishment of the JV.

Minister of Industry and Electricity

On 22 October in 1983, as SABIC was conquering new markets, Al Zamil was appointed Minister of Industry and Electricity, and Chairman of SABIC, replacing Ghazi Al-Ghosaibi. From that day on, Al Zamil was at the frontline of Saudi Arabia’s industrialization.

Part of his legacy as a Minister of Industry and Electricity was the development of the private industrial sector in the kingdom and working to expand and improve access to electricity throughout Saudi Arabia.

Al Zamil always envisioned SABIC as a catalyst for industrial development and an enabler for the creation of downstream industries in the Kingdom as well as industries overseas. His shrewd move to establish strong international marketing presence laid the foundation for SABIC’s massive global expansion in the years to come. By the end of 1995, when he relinquished his position as Chairman, SABIC had five international offices covering Asia, Europe and the United States; six sales and service offices in these same locations; and 16 distribution centres and storage facilities across North America, Asia, North Africa and Europe. SABIC’s first marketing subsidiaries SABIC Europe, SABIC Americas and SABIC Japan were created.

When Al Zamil finished his final term in 1995, SABIC was on the road to greatness. Sales revenue stood at nearly USD 7 billion and the company had USD 16 billion in assets.

Upon retiring from his Ministerial post, Al Zamil returned to the family business, the Al Zamil Group, helping to build its international presence and portfolio of Chemical companies. In 1999, together with his brother Dr. Abdulrahman Al Zamil, he established the Saudi International Petrochemical Company (Sipchem) in 1999 and secured the technology it needed to succeed and break into the petrochemical market. As Sipchem was moving ahead, he brought another group of investors to join Sahara Petrochemical Company, which would later on participate in or launch a number of successful JVs such as Al Waha and Tasnee and Sahara Olefins Company (TSOC).

For Al Zamil, the development of local capabilities was the most important achievement of SABIC, a hallmark of his dedication to the real future of his country – its people. By the 1990s more than 15,000 Saudis had been trained to take up jobs in industry. He managed to build employees from scratch with managerial and good business skills.

Al Zamil’s vision for the future was for young Saudis alone to govern SABIC – a source of pride at SABIC today. He launched and sustained the process of Saudization, starting a major recruitment campaign across the Kingdom to hire and develop young Saudi talent, sending them to gain hands on training through SABIC’s joint venture partners in the US and Japan.

During his lifetime, Al Zamil served as Director, Chairman of the Board, President and Chief Operating Officer of the Zamil Group Holding Company. He was also the Chairman of the Board of Alinma Bank, Sahara Petrochemical Company, Sipchem, Saudi Consulting Services House (former Industrial Research and Development Center), , SADAF, Al Razi, Petrokemya, Yanbt, , Vice Chairman on the Board of GPIC, representing SABIC and Head of the Saudi side in the Saudi-Swiss Joint Committee.

The lifetime achievements of Abdulaziz Al Zamil have garnered global and regional recognition. He always had the backing and unconditional trust of Saudi Arabia’s wise leadership, working hand in hand with his colleagues and peers to build a successful chemical sector. In 1984, he received the King Abdul Aziz Medal from King Fahd for his lasting contributions to the development of his country. He was also awarded the Richard J. Bolte Sr. Award for supporting industries in 2015 by the Chemical Heritage Foundation (today Science History Institute).

Al Zamil’s legacy spans forty years of unprecedented industry growth, exceptional business leadership, perseverance and commitment to the development of his country. At a time of great challenges, he overcame all obstacles that stood in his way and realized the kingdom’s vision for a better future. His legacy sets out an example for future generations to follow.